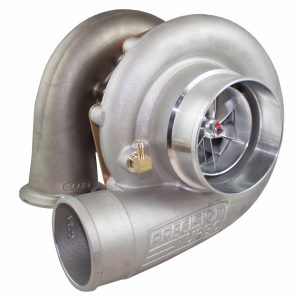 As a 2018 release from Precision Turbo, the GEN2 PT7275 CEA unit is capable of unleashing 1200 horsepower with the right application.

It features a ceramic, dual ball bearing system, and despite being a little smaller as a unit than first generation units, it produces equivalent power.

During testing by Precision, the GEN2 PT7275 CEA was able to yield 1110 horsepower and 639 foot pounds of torque on a Honda Integra that would later achieve 200mph in a half mile race.

This is definitely at the upper end of what you could use on a street car, but if you are brave enough then this turbo can handle your dreams.

Being such a recent design, you can be confident that this turbo is at the cutting edge of engineering and future proofed for years to come. As with all of our high end Precision Turbos, we really recommend calling us here at Gas Racing and discussing what the right turbo would be for you. It could very well be the GEN2 PT7275 is perfect for you and talking with us will help you feel right about your decision.

We have this turbo available for Australian delivery, with a 12 month factory warranty and technical support. Call +61296043643, email us, or use the form below to make an order inquiry, and remember our best price policy as Australia’s only authorised Precision Turbo dealer. We believe in speaking personally with our customers to ensure they are getting not just the best price, but also the right turbo for their engine.